The reviewer didn’t like this issue as much as I did. Or, will, depending on when you read this post…. 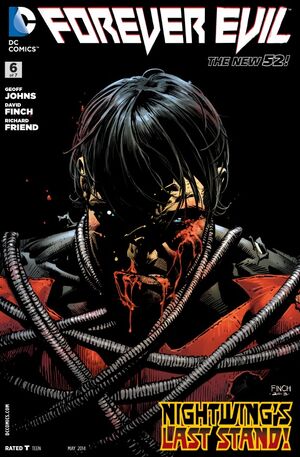 The Story: Not only is morality topsy-turvy on Earth-3, the spelling is off, too!

The Review: After I reviewed the first issue of Forever Evil, commenter Invasionforce and I had a slight disagreement about its merits.  Invasionforce was of the mind that the storyline served as a kind of political allegory, with “evil” as a stand-in for social Darwinism, where one’s fitness for survival need not include scruples or any humanist sentiment whatsoever.  I was of the mind that Forever Evil was just another splashy event drenched in mindless superpowered battles.

No offense to Invasionforce, but at this point, I’m convinced that history will validate my perspective on things.  It’s been many months since we’ve seen the Ultraman, Luthor, or anyone else espouse their views on anything; they’ve been too busy fulfilling their intended roles in…